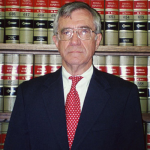 Frank attended law school after completing an accounting degree at Mississippi State University and quickly realizing that accountancy was not the career path he wanted to pursue.  He holds the distinction of being one of very few law students who
began a federal judicial clerkship before graduating from law school.  Frank served a two year clerkship with Judge Claude Clayton during the late 1960s, at the height of civil rights litigation in the South, first serving Judge Clayton in the
Northern District of Mississippi, then following him to the Fifth Circuit after Clayton’s appointment to that prestigious appellate court.   After observing some of the country’s most accomplished trial lawyers, Frank became convinced he wanted to
be a litigator.

After his clerkship with Judge Clayton was complete, Frank accepted a job offer, extended by General Albert Lake, to join the Lake Tindall law firm in Greenville, Mississippi, over offers from firms in New Orleans and Houston.  His early work
revolved largely around insurance defense litigation, with an emphasis in motor vehicle accidents, along with some worker’s compensation defense work.

Over the course of several decades, Frank has built an active admiralty practice.  He has been lead counsel on a multitude of admiralty and maritime cases, covering most of the inland rivers of the Eastern United States to blue water disputes.
Frank’s marine practice was initially focused on representing marine companies, and though he still regularly represents the marine industry, his practice has evolved over the years as he has been engaged by individual seaman who have been injured
while working for marine employers for cases involving the Jones Act and unseaworthiness.  It is in these actions in which Frank has excelled over the last ten to fifteen years.  He has attained multiple large verdicts and settlements for
deckhands, pilots, captains, and engineers under the Jones Act and unseaworthiness doctrines of marine law.

Frank currently has an active litigation practice in all of the following areas: